Cardbot Derby is the latest in an ongoing challenge to create interesting, non-trivial games using one or more standard decks of playing cards. The main idea was borrowed from RoboRally (a rather splendid fracas of a game), and then twisted to fit the affordances of the cards. Currently it is very much under construction, but first impressions hint that there is enough potential to warrant further iterations.

Any feedback? Leave a comment via a github issue.

You are controlling your robot, across a dangerous and complex tubular surface, with sets of commands. You have a series of locations to reach. Other robots are out there too, and they will interfere. The first robot to reach all the locations, in the correct order, is the winner.

Start with the first deck of 52 cards: 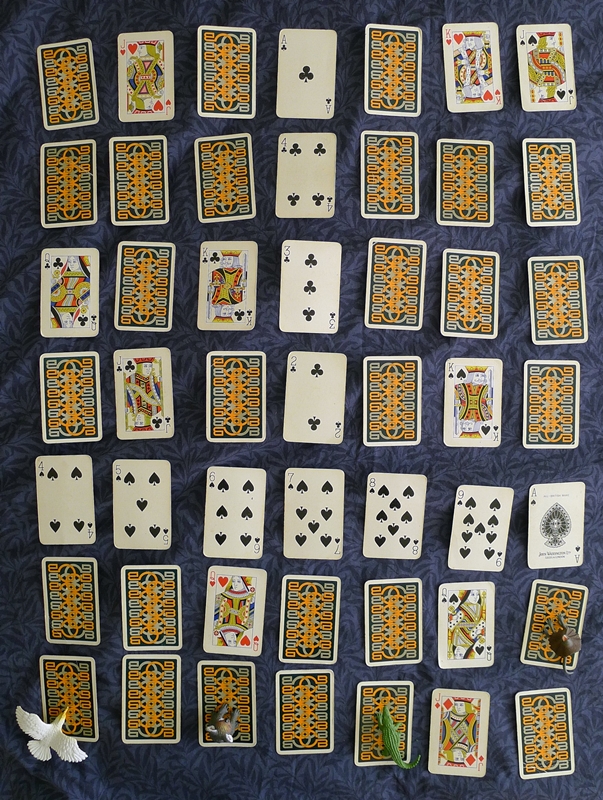 With the second deck of cards:

At the start of each round, each player decides on their sequence of commands which will be used to control their robot

Timing is of the essence. Once one player has set up their command card sequence, all other players have 30 seconds to do the same, otherwise their 5 cards are handed on as-is.

For the first command, in sync across all the players:

Repeat for the next 4 commands.

If the command card being played is one of Ace, King, Queen, Jack, Ten,

The surface on which the robots move can be considered as tubular. The left and right sides of the grid wrap around and meet. If you go forward off the right hand side of the grid, you move onto the corresponding location on the left hand side, and vice versa.

The top and bottom of the grid do not wrap.

At most one robot can ever be on a given location.

If a robot attempts to enter an occupied location

If the command card being played is one of 2-9, turn the robot that many times 90’ clockwise.

For example, if the card is a

Once the current command card has been acted upon, for all robots, if a robot is sitting on a CONVEYER BELT (i.e., a line of black cards starting with an Ace) it is moved one position along the belt (away from the Ace).

If the robot is already on the last belt position, it is moved onto the next location along from the belt (according to the same rules as a standard MOVE, in the case that location is already occupied).

Once all 5 commands have been acted out:

If, by the end of the round, one or more player has reached all 3 targets, in order (i.e. a red Jack, Queen, King), they have won.

Back to step 1 for the next round.

This game is ‘better’ (meaning, more anarchic) the more robots are floundering around in play, so here are some suggestions to increase the robot count

Once you have the idea of the one conveyer belt working ok, let your imaginations run riot.

Treat the black cards as special features on the grid, and the red court cards as targets.

...
<<PREV NEXT>>
...
...
Cardbot Derby
(from Notes on games)
by Chris Gathercole
http://stories.upthebuzzard.com, RSS
published: 26 December 2017
...
This work is licensed under a
Creative Commons Attribution-NonCommercial-ShareAlike 3.0 Unported License.
...
...
in the style of
...
Credits

Background image by me