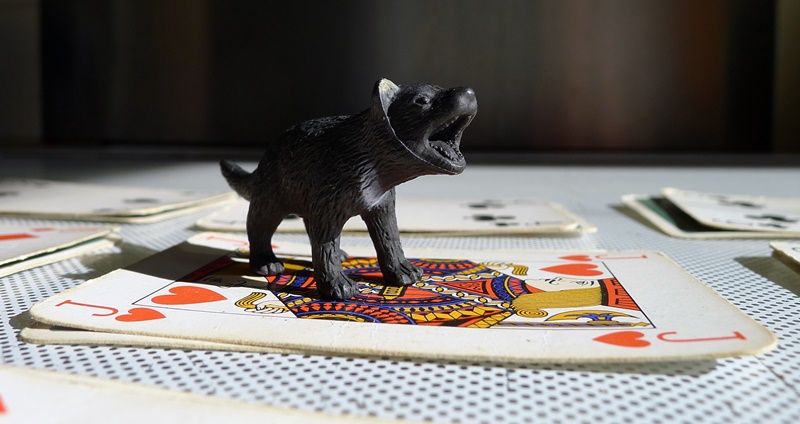 Pouches of Destiny started as Greedy Devils which started as an entry to the 2017 200WordRPG challenge. Hurriedly squeezing it into 200 words (plus never having actually played it outside of my own head) meant that many nuances needed (a) discovering, and (b) ironing out. After some play-testing, the rules have improved, and it does seem like there is a fun+interesting game in there. Meanwhile, we’ll keep tinkering.

Any feedback? Leave a comment via this form, or via a github issue.

You are highly motivated marsupials, scrabbling around for food on an ever-shifting rubbish heap, fighting for survival and supremacy. Everything you carry in your pouch leaches into you, changing your capabilities. Pick wisely. (ok, so, marsupials don’t usually carry food in their pouches, but, artistic license, dammit!)

You all start next to the heap, on bedrock, at points of your own choosing, with empty pouches.

You then take turns to explore the heap, picking up and discarding cards, and possibly fighting.

The winner will be the first marsupial with a pouch full of 5 different foods, standing on the highest visible spot on the heap.

Start with a deck of 52 cards.

Shuffle the remaining deck, and deal the cards face down as 9 mini piles arranged in a 3x3 grid - doesn’t matter if the piles have different numbers of cards.

Turn over the top card of each pile to be face up.

Later, any time the top card is taken from a pile, ensure the revealed card is face up.

The value of the top card in each of the piles represents the height above bedrock of the heap at that location.

You start next to the heap, on bedrock, at locations of your own choosing, and can move alongside or onto the heap.

As you scramble across the heap, you can (and should) pick up cards to put in your pouch. It can hold a maximum of 5 cards, and you must immediately DISCARD any excess cards.

Your pouch cards are laid out in front you, face up, visible to all the other players at all times, except when you are selecting a card for fighting.

Each card in your pouch can be considered as food (if smaller than 6), or a weapon to be used in a fight (bigger is better). To win, you will need one of each of the possible food values (Ace,2,3,4,5) in your pouch (and to be standing on the highest visible part of the heap). Furthermore, the cards in your pouch ‘leach’ into you, affecting your capabilities.

If you have any

In each round, each player in turn chooses one of the following deliberate actions

Once the MOVE/PICK/CHOICE has been made, if the payer who’s turn it is is on a shared location (whether newly arrived, or still there from an earlier MOVE), there may be a FIGHT.

Moves are one step NESW to a neighbouring spot on the grid, staying on or beside the heap.

If you already have a spade in your pouch, you can pick an additional card from the same or a different location.

Having picked one or two cards, if your pouch size is exceeded you must immediately DISCARD enough cards to bring it down to an allowed size.

You can choose to just discard a card from your existing pouch, or maybe you have to make room for a newly picked card.

The card can be

Each marsupial in a turn has one chance to initiate one fight on a shared location. This might mean choosing to fight again with the marsupial who only just initiated the previous fight.

The option to initiate a fight starts with the marsupial who’s turn it currently is, and proceeds turn-wise round the group of marsupials on the same location. If no-one wants a fight, no fight happens.

For a fight between two marsupials, each gathers up their pouch and secretly selects a card to be a weapon. The weapons are revealed simultaneously. The two card values are compared, factoring in any ‘leaching’ effects, and the higher value wins.

If the result is a draw, both cards are immediately DISCARDed, defender first.

If the result is decisive, both cards are immediately DISCARDed, loser first. The pouches are revealed again, and the winner chooses a card from the loser’s pouch.

In each round, each player takes their turn to choose one action (with a caveat that a fight could break out at any time). And when deciding if there is to be a fight, the players are consulted in the same order as for choosing actions.

For 2 players, alternate who goes first in each round.

For 3 or more players, pick a player at random to start, then go round clockwise from them for each round. Every so often, at random or when someone complains, pick a new person and direction to start each round.

Or make up your own fair solution for mixing up the order in which everyone gets to make their choices.

So the game is not enough of a challenge? Well, try these variants on for size.

So the game is tightly poised, and you are all doing a fine job of stopping anyone from winning?

...
<<PREV NEXT>>
...
...
Pouches of Destiny
(from Notes on games)
by Chris Gathercole
http://stories.upthebuzzard.com, RSS
published: 17 June 2017
...
This work is licensed under a
Creative Commons Attribution-NonCommercial-ShareAlike 3.0 Unported License.
...
...
in the style of
...
Credits

Background image by me